I'll be the judge of my own manliness. - Dennis Rodman

When I was a young boy, I refuse to play “bahay-bahayan” with my younger sister and our neighbor’s child. I thought of that as mushy and considered it girlie stuff. If they found another boy to play with them, I teased and called him sissy. I shouldn’t have done that. 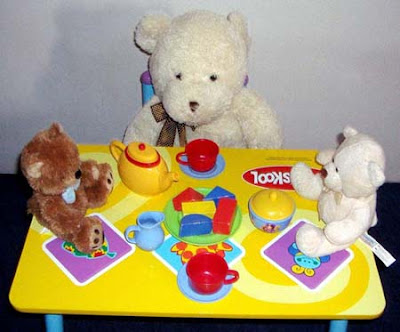 Since my wife bought my daughter’s toy tea set, Bea would ask, no demand that I sit in her little chair to have tea with her and her “friends”. I have to sip her make believe tea and pretend to eat her "cakes" as if they are the most delicious wooden blocks I ever tasted. I have to be polite and do animated conversation with Pooh and the other bears, much to my wife’s amusement.

All my bachelor life I have never imagined that one day I would do such a thing. But a father would do anything, even shed his “manly” image and make a fool of himself, to please his only child.
Posted by BlogusVox