On Mathematics and the Reality of Practical Living

Recently I went to BayanihanPost.com to get a “feel” of what kind of website is inviting me to join its bloggers’ group. What grabs my attention was Renita Angus’ post, advocating the importance of mathematics as a tool and as a subject not to be dreaded by students. As a math teacher, her frustration towards students’ fear of numbers is understandable. And as an engineer myself, I can clearly see her point of view.

I came from a family of engineers and accountant. Numbers don’t intimidate me and to borrow Senator Santiago’s phrase “We eat numbers for breakfast”. My knowledge of mathematics is adequate enough to meet head on mathematical problems I encounter in my line of work. But do we really have to prioritize math from the rest of other subjects?

Some people are gifted with minds attuned to numbers. They can do double integration easy, like eating a piece of cake. These are the ones who eventually choose professions related to science. They become scientists, engineers and architects. Others possess sophisticated ears and eyes that they can see and hear beauty from thin air, capture and reproduce it for others to enjoy and appreciate. These are visual artists and musicians, people who may appreciate mathematics only through sine waves and fractal images. Still there are those who possess photographic memories or organizational skill but can barely grasp abstract concepts of numbers, yet still succeed in becoming good lawyers or managers. A nurse may have to compute exact dosage of medication or a baker may need to know the number of cups of sugar in a recipe. But they don’t have to hurdle the whole 9 yards, from Algebra to Calculus, to achieve this. A simple arithmetic will suffice.

I agree we can’t live without mathematics. Like Neo’s “Matrix”, it’s around us. Its part of our daily lives, so familiar that we take it for granted. It’s the basic foundation of our infrastructure and the backbone of inventions which helps eases domestic living. But we are also living in an age where gigabits of information are bombarded to us everyday. Science is progressing and technology is advancing at an overwhelming rate that it can’t be contained in one repository. It has to be divided into fields, branching out into sub-fields called specialization.

Not all of us could be engineers, lawyers or doctors. We are not born equal. Some are better than others, may it be in material form, talent, skill or physical structure. If we are to assume each man is capable of acquiring all of these, then politicians don’t need speech writers to mesmerize his constituents. Businessmen don’t need accountants to balance their books. Art, music and literature won’t be appreciated, philosophy would be meaningless and humanity will cease to exist. All that is left is a cold, calculating brain, devoid of emotion, dependent on logic.

That’s why holistic method of education has its appeal. It identifies, develop and encourage students’ inclination and strong point. I believed students will have a better chance in the real world and live productive lives if they love their chosen field and happy with their work. Wouldn’t it be better if we teach the majority what is only necessary and leave challenging subjects to those who has the patience and gift of understanding complicated ideas? That way they will have more time to discover and study things that interest them, rather than master a concept which only a fraction can be practically applied in their daily life.
Posted by BlogusVox 25 comments:

When job order is infrequent, which happens most of the time, and nothing of interest catches my eye in the internet, I play. My favorite games are “first person” combat role. Gory, loud and can’t be played in my office computer. It needs lots of memory and special video card to enjoy. To pass time I entertain myself with freebies that come along when installing XP OS. Here are two of the games I consider myself an “expert”.

Unlike “draw” solitaire, you can save spider while in the middle of the game. I win most of the time because I choose which set to play and follow some simple rules I formulate before starting. Rule one: Never starts a game when the number of cards you can move is less than 5. Rule two: Avoid playing a set where there is more than one king open. Rule three: If possible, combine cards of the same suits and always “save” a game when faced with several options. That way you can “reload” and try another move in case the last option you made ends up nowhere.

Minesweeper
You should have plenty of luck and good in logic when playing this game. Because in an end game where there are two “unopened” squares and one mine left, your chance of choosing the right square is 50%. Usually I average 150 seconds on this one but my highest score is 125 seconds. I think I’m just lucky at that time since I haven’t duplicated that feat ever since. But what I’m proud of is I’ve completed the game in 206 seconds at the same time opened up an 8 clustered mines. 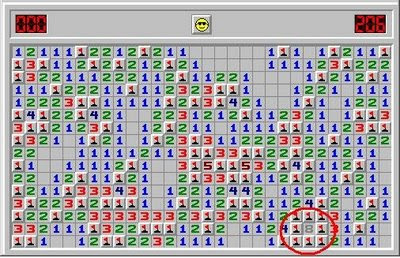 How about you? What’s your favorite game when you’re bored? 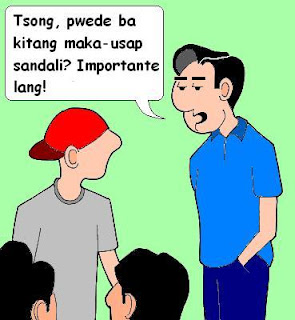 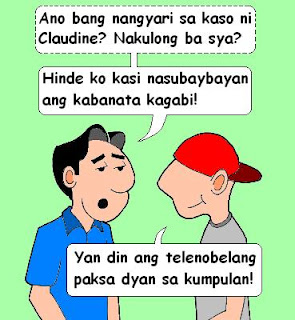 I couldn’t help thinking about the effects of the recent financial crises that hits the US and Europe. If giants like AIG and Fortis are reeling and needs its governments’ shoulder to steady its wobbling posture. How will banks in the Philippines take such economic punch if its own government can’t even make ends meet in balancing its own budget?

Like most OFWs, I send my earnings back home, in a bank inside a “time capsule”. I couldn’t touch nor withdraw it until a certain period expires. My anxiety only increases because our PDIC guarantees only a fix amount for each depositor, unlike in Europe, where governments agreed to guarantee entire savings to boost confidence and prevent withdrawals by depositors. So if you have several accounts in your name, you might as well seek intervention from all the saints you know that this catastrophe won’t hit your bank directly.

I’m neither an economist nor a financial analyst. All I can do is put together an intelligent assumption based on “street level” observation. US economy thrives on credit. Americans buy almost everything on credit, from the roof over their heads, to their cars, utilities, entertainment and even their daily sustenance. If you pay cash, either you’re rich or you got something to hide from the Feds. Outstanding accounts are settled every month and salaries shrunk from soaking in bills. For an average Joe, his lucky if he could save 10% of his monthly wage after these deductions.

I first took notice and sense something’s wrong when they started foreclosing houses in the US. Most homeowners blamed financial institutions for their predicament. I don’t know why when all this creditors did was lent money to buy houses, cars and other necessities needed to live a decent life. Of course there’s the issue of exaggerated interest, but “lendees” are supposed to know the rules. It may take ten or twenty years to totally pay Joe’s loans, but as long as his up-to-date on his payment, some extra cash saved on the side, everything’s fine.

Perhaps problem began when Joe started living the “American dream”. He bought a 4 bedroom house with a nice lawn, complete with swimming pool, instead of a respectable 3 bedroom for his wife and two kids. He bought an SUV for himself after he mailed the final payment for the family’s station wagon. Inadvertently, Joe stretched his credit to its limit. When cost of commodities took off worldwide and economic slowdown hit the US, Joe’s income diminished, resulting to foreclosure of his possessions.

Supposing1% of the population has Joe’s dilemma, I think that’s more than enough to bring down even the most secured bank in the US. What will banks do with all these properties? They’re banks; it needs money, not houses and cars, to continue their business. Like dominoes, every institution one way or another connected to Joe, tumbled down. And like the “butterfly effect”, the fluttering of Joe’s artificial delusion was felt halfway across the globe. A dream prodded by celebrity endorsed advertisement sponsored by corporate America.

I’m afraid this is just the beginning. I see a storm coming from the horizon. Pray it doesn’t make landfall.
Posted by BlogusVox 14 comments:

Too Much Emptiness In Nothing

Have you ever been in a situation where you can’t seem to do things right? It’s one of those days when your mind is devoid of constructive thoughts, sitting in a chair, staring at nothing. I’m now in that circumstance; an empty, purposeless state of mind.

An idea pops up and I try to copy it on paper only to stop in mid sentence, realizing I don’t have enough materials to finish even a paragraph. I squeezed and grind my brain yet nothing comes out. Not even a single drop of inspiration. It’s like continually pushing an elevator button, hoping it will come down quicker than it should. It doesn’t work that way.

What I need now is a child’s instinct. The gift of recognizing his mother from a group of “covered” women, when no hint of identifiable mark could be seen at all. What I need now is a Bedouin’s skill. The ability to chart an empty desert quarter, finding his way without using navigational instrument, relying only on lessons his forebears taught, passed to him by word of mouth. These are the talents I’m seeking now; the gift of recognizing a good story and the skill of guiding readers in understanding the narrative.

I’m not a good writer. I don’t even consider myself as one. I lack Sassy Lawyer’s ability to weave interesting stories wrapped around mundane topics such as meatloaf. Blogging photos of places I visited are out of question. There is no scenic place I can consider worthy of posting. I live in a city where, except for two or three outstanding landmarks, everything is the same or bland. Conformity is the word, adhering to tradition is the norm. They’ll look at you funny if you’re unconventional.

Maybe I’m still on vacation mode. The effect of five days of holiday after Ramadan is still in me. Laziness clings on my back like a crazed monkey, digging its finger nails on my shoulders, refusing to let go.

Enough of this, I’m getting tired of thinking about nothing. I may as well sleep this over tonight. Maybe tomorrow something will hit me; something interesting might occur that I can blog about.
Posted by BlogusVox 18 comments: