After two busy weeks, my daughter was already restless and bored. She keeps asking when we will go to the beach. Bea never had seen a sea shore except what she saw on pictures. She doesn’t know what beach sand feels like or sea-water taste like and the nearest thing she experienced is dipping in a swimming pool. So come Sunday morning we decided to go to a local beach resort to douse her excitement and curiosity.

Hawili Beach
There are lots of beaches in my home town but there is one particular beach my family goes to on occasion. It’s situated around 20 klicks from our place, patronized by local residents and very few foreigners knew about it (privately, I prefer it that way). It has “white” sand but not as white or as wide as the seashores of Boracay. 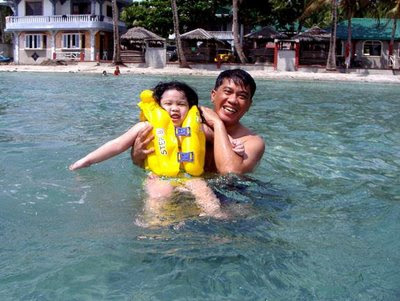 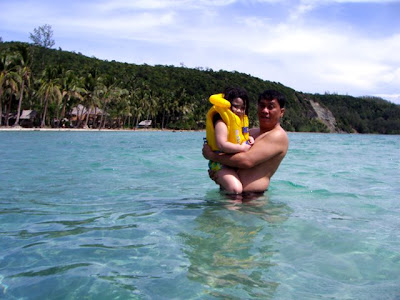 But it serves its purpose; a place for a family picnic with no tourists roaming around and a relaxing dip in the green-blue sea, a comforting feeling against the hot summer.

After that, it was my wife’s turn to do an “ala-Bea”, whining why we don’t do much on our vacation. So we pack our bags and went to Iloilo, stayed overnight at my sister’s place and in the morning, they brought us to the airport for our flight to Cebu.

Memories of Cebu
The last time I was in Cebu I was 4 or 5 years old. We went there to attend my aunt’s graduation in Medicine at the University of San Carlos. There are only two things I remember of that event; the ship that brought us there passing under the iron bridge and that little incident at the dormitory. My aunt’s dorm has a small aviary full of lovebirds and my parents left me there while they went up to see her. When they came down, a nun approaches my aunt and complained that two of the lovebirds are dead. When asked if she knows anything about it, naturally, my aunt denies everything. Until today, my family still suspects that I have something to do with it. I admit that I’m very “active” as a small child but, I swear on my grandfather’s tomb, I didn’t do it. Peks man, cross my heart, madapa sana ang hindi maniwala.

Lapu-lapu Shrine
That evening my wife’s cousin fetched and brought us to where Magellan met his creator. As we park our car, children went up to us and start asking for money but were admonished by cousin and shooed away. Anong akala nila sa amin, si Pacman? 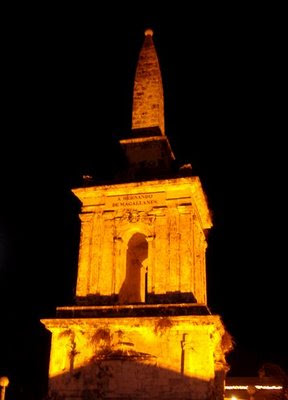 I don’t know what this obelisk represents. It looks like a tomb marker with “Hernando Magallanes” written on it. Maybe it’s where Ferdie was buried. 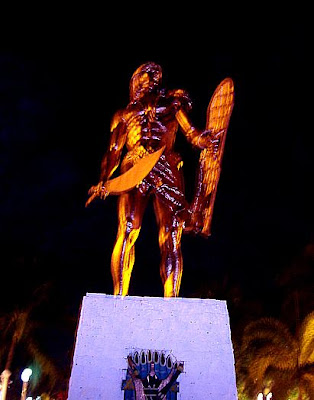 Here’s Lapu-lapu’s statue in all his glory. It reminds me of the “Oscar”.

Further on, they pointed to us the very spot where Magellan was struck down. I keep straining my eyes to see the marker but all I can see was total darkness. It would have help if we went there earlier when the sun was still up.

To some OFWs, vacation means being with loved ones and bonding with long lost friends. To others, a chance to relax and go sightseeing places they'd dreamed to visit. But one thing is for sure, vacationing means an ample sum of our savings is spent. For me, it’s a mixture of what I mentioned.

I promised my Dad I’ll repair the fence surrounding our family compound destroyed by flood when “Frank” visited our town last year. So that’s what I did. While my “mag-ina” was visiting relatives around town, I was supervising the construction of a portion of our back fence; a 6 foot high, 15 meter long concrete wall.

Actually I’m not really needed since my Dad was doing the supervision. It‘s just a pretext not to accompany my wife on her rounds. The “playoffs” is more important than meeting some balik-bayan uncles and aunties-in-law whose conversation revolves around comparing the situation in the Philippines and the US of A. Like that ad commercial "walang ganyan sa states..." ba.

I’m glad my loss wasn’t as bad as I expected from that recent deluge. Nobody lives in my house and only on some occasion does someone check it out. When “Frank” struck and everything went under water, it took two months before somebody entered and cleaned it up. But to my delight, except for my mid-range speakers and sub-woofer, all our appliances are okay. Of course there’s the issue of our clothes and linens smelling like rags. It took several washing and lots of Downy to removed the stench.

One thing nice about vacationing is your no longer obliges to do what you usually do when you’re abroad. Eat, sleep and watched TV is my daily agenda. My sister-in-law was even kind to lend us her cook so I can taste my favorite dishes (any thing with “gata”) and of course pork. Not a single day that we don’t have pork on the table, from adobo to lechon-kawali. She (the cook) was even perplexed when we asked her to boil “kamote” for meryenda (kamote is expensive in the Middle East). We spread it with margarine and down it up with kalamansi juice… ahhh sarap. It’s a respite from my wife’s cooking whose menu consists of only 6 dishes; one for each day of the week. And just like God, we rest our palate and eat out on the 7th day.

We always timed our vacation to coincide with summer but I never anticipated that it will be this hot. Sweats are dripping down my elbow even when I’m doing nothing but standing outside the veranda to catch some breeze. I have to shower thrice a day to minimize my discomfort. Luckily, the AC in our bedroom works fine or my daughter would have a hard time sleeping at night. Using an electric fan isn’t sufficient to cool a hot summer evening.

Enough of my grumbling, next time I’ll tell about our “lamyerda” with matching pictures.
Posted by BlogusVox 25 comments: