On Being Different and Practical

I don't pretend to be captain weird. I just do what I do. – Johnny Depp

Do you think I’m weird or perhaps eccentric? Some do. From people I don’t know, like the PEBA judge who quoted “I like his quirky way of writing” to my German boss who insisted that I address him on a first name basis. I decline, telling him “Sir” is shorter and easier to pronounce. I don’t see weird in that.
I got away with things I said and do because at first glance it seems, to some, it’s out of the norm but then realized there’s a grain of logic or practicality in it. The head of the IT department once told some staff to give me leeway. He said it’s understandable if I act like that because I’m a programmer. I don’t know how programmers act. All I’m doing is being me. I speak out if I disagree. I point out if something is wrong. I say “No” when everyone says “Yes” or silent when things are not right.
If you care for your job, you’ll go the extra mile to see to it that everything is straightened out. Your boss’ assessment is based on what ever feed back he gets from his staff. You should “protect” him that he wont commit any bad decision because his also answerable to someone higher up. It has nothing to do with “loyalty”. Any SNAFU he makes will reflect on the whole department and that includes YOU. There’s nothing wrong or “different” in that.
Even my wife said “Iba ka sa mga asawa nang mga kakilala ko”. She once hinted “Alam mo, ang mister ni ganito, binilhan sya ng Fendi bag nung birthday nya” to which I replied “Eh di sabihin mo kay ganito na papabili ka rin ng Fendi bag sa mister nya”. What is she complaining about? I bought her a brand new 10 kilo capacity washing machine on her birthday. It’s just a coincidence that our old one was on its final breath.
It’s not that I’m a cheapskate. Why should I buy a LED flat screen when my 24” TV still works fine? Why should I buy a 4 wheel drive instead of a sedan when all I do is just drive inside the city? Pare-pareho lang namang “installment” ang pag bili ng sasakyang yan. I find it pretentious for someone to flaunt their Louis Vuitton handbag or show-off their latest 4G cell phone and then makikita mong nakiki ukay-ukay sa sales sa mall or else nakiki-susyo on dividing the price of a “buy one take one” offer sa Debenhams. Practical? Yes! But do we really have to “display” those expensive materials to elicit awe or envy and to subtly point out that we are way above the social strata? Kung talagang mayaman ako, hindi na ako mag tatrabaho dito sa Middle East.
But I’m all out when it comes to my stomach. Except for those restaurants who serve more eating utensils than food on the table, I think, we ate in almost all the fancy ones here in the city. It’s a weakness my daughter and I share and I don’t scrimp when it comes to that.
Posted by BlogusVox 23 comments: 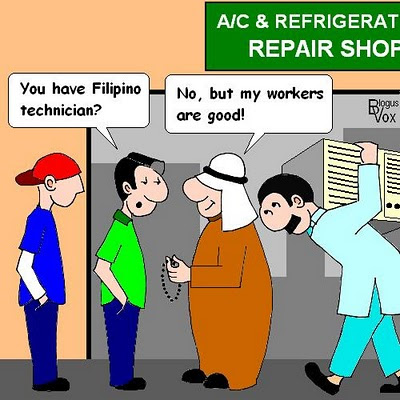 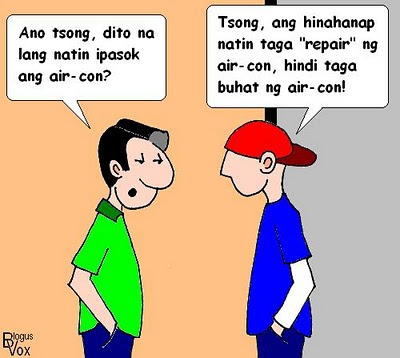 On Religion and Faith

Therefore be at peace with God,
whatever you conceive Him to be,
and whatever your labors and aspirations,
in the noisy confusion of life keep peace with your soul. - Desiderata
Last night I saw BBC’s Intelligence Squared debate between former Prime Minister Tony Blair and famous author Christopher Hitchens discussing the topic – “Is religion a force for good in the world?”
Blair was defending religion standing on his personal belief in God while Hitchen, an atheist, tried to debunk that conviction with logic sprinkled with dry humor. At the onset, “cons” was favored, ahead by 30% against the “pros”, in which 20% of the listeners are “undecided”. After deliberation, “cons” lead increased. Technically “cons” won but, in my opinion, “pros” didn’t lose either because its points didn’t diminish. Its standing also improved garnering almost half the “undecided” opinion*.
I personally sided with Hitchen but not totally because I still believed in a Supreme Entity. May He be the ultimate judge, jury and executioner, a specie far more superior than our own or a force that governs the physical universe is another topic to be discussed.
The thing is I refuse to abide with “organized” religion. I don’t need somebody, who wears a white robe or an immaculately dressed man with manicured nails, to tell me how to go about my business in this world. Blame my dear mother. She exposed me to the bible at an early age hoping, someday, her second son will don the frock and serve the Lord. Instead the opposite happened. I found inconsistencies and began to question the “goodness” of God especially in the Old Testament. She calls me “erehes” (Spanish for heretic) every time she runs out of answer.
For me, faith is a personal belief. I have my own concept of who is God and what to expect from Him. It is an amalgamation of different “ism” I found logical, practical or construed to contain “goodness” in it. I don’t blame Him for any misfortune I meet, for any catastrophic upheaval caused by nature or man-made destruction. But I can’t help but thanks Him for all the good things that come my way. I tried to emulate Jesus’ teaching about goodness to fellow men and Confucian philosophy on how to separate man from beast. But I don’t believed in the Trinity nor totally agree with the “thick face - black heart” principle. I believe in the benefit of Yoga and the effect of Karma but I won’t buy polytheism. I believe in “yin-yang”, “causes and effect”, the balance of nature, compassion, moderation and humility but I wont pray for guidance to my long dead grandparents nor expect to be born again.
If it is my “God-given” birthright to think, then it is up to me to decide the difference between right and wrong or good and bad. What is important is I am at peace with my God. He doesn’t threaten me with eternal damnation in case I disagree with Him. He doesn’t destroy and create my world every thousand or so years. He doesn’t have “favoritism” among his creation and He is neither vain nor insecure to require me to pledge my allegiance several times a day.
Don’t confuse opinion with belief. It takes proof to build an opinion but believing is all it takes in your belief. You may compare it with a scene from the movie, Finding Nemo: The whale told Dory to “let go” because “it is time”. Marlin, afraid, reluctantly asked “How do you know he won’t eat us?” To which Dory replied “I don’t” – that my friends is what I call FAITH.
---- o 0 o -----
*If you’re interested on watching the episode of Intelligence Squared, you may refer to these dates. Or you can watch the highlights on YouTube. Tag in “Intelligence Square”, “Tony Blair” and “Christopher Hitchen” on your search.
Posted by BlogusVox 10 comments: