Meet Ms. Sardonyx of Hulascoop atbp; a wife and mother who looks at life in a positive way in spite being an NPA (No-Permanent-Address). That’s because she’s been transferring from one country to another, depending where her hubby is assigned. But she’s no ordinary “army wife”. She's a Mapua engineering graduate who sacrificed her profession to take care of her husband and be a doting mother to her two lovely children. 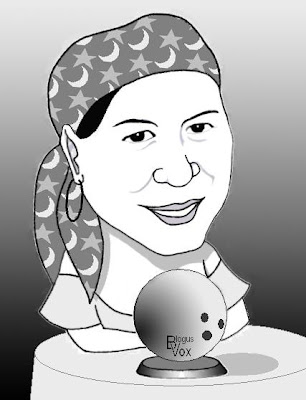 I have no other specimen of Ms. Sardz except from what I found in a PEBA site. It’s quite difficult to draw a frontal face when your model’s picture is taken from an above-the-head angle. I hope I did justice to this one.

Ms. Sardz, if you have time, please email me your address so I can send you the original copy of your caricature.
Posted by BlogusVox 9 comments:

And The Winner Is…

Thank you to all who participated even though some of you broke the code but didn’t finish the problem. I know you’d like to remain anonymous and I respect that.

To those who are wondering, here’s the deciphered code: 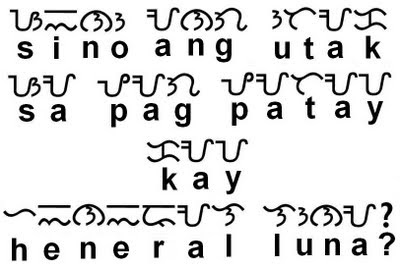 And the answer is “Emilio Aguinaldo”. Congratulation to Ms. Sardonyx of Hulascoop atbp for her correct entry.

For a snippet of history and clue, you may find this interesting. Of course a more “colorful” narrative of what happened that faithful day could be found in Ambet Ocampo’s book - “Luna’s Mustache”. Acampo’s research was also the reason why I don’t consider Aguinaldo a “hero”. To me his just another political opportunist with a “gangstah” mentality. His thinking and methods are comparable to those warlords from Maguindanao.

I’ll post Ms. Sardz caricature in a couple of days. Again, thank you all.
Posted by BlogusVox 12 comments:

How time fly fast and another year was added to my blog. As I’ve promised before, I’ll do another “pa-contest” and who ever wins will get a picture of them selves in cartoon form. All you have to do is solve this puzzle:

Just like before, I’ll pick two winners. The first commenter to solve it will take the first slot. I’ll gather the rest of correct answers and raffle it using my random program. Who ever wins will take the second slot.
You have one week to find out the answer. Goodluck!
P.S.
By the way, previous winners may submit their answers but will not be included in the contest. Pag bigyan naman natin yung hindi pa nanalo, hane. Thanks!
Posted by BlogusVox 15 comments:

Example has more followers than reason. We unconsciously imitate what pleases us, and approximate to the characters we most admire. – Christian Nestell Bovee

My daughter is now in grade 1 and her school curriculum is based on the Philippines’ standard of education. But unlike public schools in Metro Manila, she absorbs 7 hours of quality education and her subjects are more advanced compared to most schools in the Philippines.

Obviously, DECs noticed the state of our education that they want to implement what they called K-12 program - our government plan of extending students primary and secondary schooling from 10 to 12 years. Like most of their “noble” vision, it’s out of touch with reality, too much talk but lacks planning and logistic.

Their main argument was that most countries are applying 12 years minimum education. Thus we should also do same to be competitive and on equal footing with the rest of the world. I’m a product of public school. But back then, our education was at par with the more expensive private schools. I don’t want to sound “elitist” but here in the Middle East, besides demonstrating “superior” know-how, our professionals can handle their own against other expats who have K-12 education. It is not how long you stayed in school but how much knowledge one absorbed and learned while schooling.

I admit the current public education in our country sucks. Most of their products are ill-prepared and possess half-baked knowledge. But extending the years of learning is not the answer. You may implement K-12, K-13 or K to the nth year but you’ll still get the same result as long as students spend 4 hours or less in the classroom per day and taught by uninspired or ill-equipped teachers. It’s not only taxing for the students, it’s an additional burden for the parents as well.

It’s not bad to emulate systems of progressive countries. But one also has to consider if what one is trying to imitate is applicable to ones need. Hinde yung gaya lang ng gaya kahit hinde kaya. It reminds me tuloy way back in the late ‘70s when we have a national power shortage. Macoy’s think-tank implemented a “Daylight-Saving-Time” to save energy by advancing the time by one hour. Kaya madilim pa, marami ng tao sa kalsada. This idea is applicable in the western hemisphere because on certain season, the sun is still up even when it’s already 8 o’clock in the evening. They could save electricity by availing on the lights powered by the sun. But the Philippines is situated on the tropics. The sun rises at 6 o’clock in the morning and sets at 6’oclock in the evening. Constant yan all year round kaya wala kang na-save kung hinde konting muta because you have to wake-up very early to go to school or work.

-----oOo------
By the way guys, I’m going to set another “pa-contest” on my next post. Para yan sa blog-anniversary of The Sandbox, even if its already past its due date.
Posted by BlogusVox 19 comments: