One Is Better Than None

Been busy I didn’t realize I’ve neglected to blog for sometime. Besides my work, which mostly geeks appreciate, here’s a summary of my other “activities”:
Car Accident
I met an accident three weeks ago while bringing my daughter to school. I was driving slowly along a narrow street when an American car struck me at the driver side. I have to get out from the passenger door since mine was crushed and jammed. The thing is, the other car was also going slow but suddenly accelerated when it was just a few feet from me. I think the driver panicked and stepped on the accelerator instead of the brakes. The poor guy was new in the kingdom. He can’t speak English or Arabic, doesn’t have a driver’s license and the car was not insured. Saudi police are unforgiving, especially to foreigners, when they catch you driving around without proper papers. You’ll go to prison and for how long, depends on how responsible your “sponsor” is. It might only be for a day but some spend months in detention because their “kafil” refuses to pay traffic fines.
Lucky for me, our company lent me a car while mine was being repaired in the insurance’s workshop. For that I thank my kumpadres J and F for facilitating the vehicle. When I got my car back, it looks as if nothing happened. They restore the crushed door and fixed other dents which were not part of the accident. They even repaired the automatic door lock which wasn’t working for sometime. How ever, I hear a sound, like a vibrating spring, every time I close the door. But over-all…I’m satisfied. 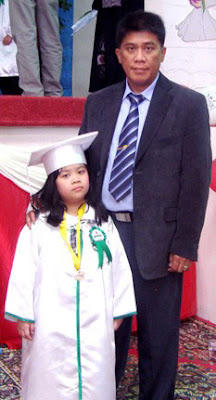 Bea’s "Graduation"
Last week was also hectic for us. A lot of preparation; running here and there and buying things for the school’s annual commencement exercise. It was also a lot of “first” for me. It was my first to wear a coat and tie because the invitation card specified “formal and decent attire”. I know what “formal attire” is but I have no idea what they meant by “formal and decent attire”. Perhaps a man is considered decent if in formal attire. A paradox if applied to some of our politicians. It was also my first encounter of the word “valediction”. The emcee keeps on repeating it as if to emphasize it’s the standard or proper word to use for this occasion. During my time, our “top nerd” gives his valedictory address. Their honorees however gave their “valediction”. A lot of THANK YOUs but I didn’t hear a single word of “goodbye”, “adieu”, “so long”  or “farewell”.
The venue was well decorated, organized and very formal. Parents have reserved seats and the chairs have fancy covering with parent’s name written at the back. Ours are situated right smack in the middle of the row. We have to say a lot of “excuse me” and “sorry” before we could reach our designated seats. It wasn’t comfortable. Because it’s a combined ceremony of preps, elementary and high school graduates, a lot of parents were expected to attend. They cramp all the chairs together, without extra space for elbow and leg room, to accommodate everybody. It’s like sitting in PAL’s economy class during a peak season flight.
If you’re in this kind of situation where you can’t move without saying “excuse me” or “sorry”, you are a “captive audience” of any speaker at the podium. You are in their mercy and you can’t do anything but endure their speeches. Their guest speaker, a big shot from DECS, gave her speech lasting 30 minutes (yes! I clocked it) and that didn’t include the introduction which was 10 minutes more. Not only that, I have to suffer three other “valedictions”. These people haven't heard of the phrase "short and terse"; a basic when taking Public Speaking 101.
But all complains faded when it was my daughter’s turn to walk on stage. Parents are required to accompany prep graduates. So to meet our daughter halfway, my wife and I again have to say “excuse me” and “sorry”, not only once but thrice. First; when she received her diploma, another, when she got her medal for “academic distinction” and a third time when she accepted her two “certificate of recognition”. It was all worth it and the other parents doesn’t seem to mind our constant “excuses” and “apologies”.
That wraps up everything this month. At least I manage a single post and didn’t get a grade of zero.
Posted by BlogusVox 30 comments: