PhilHealth Insurance: Am I My Brother’s Keeper?

Recently there was a big discussion on Facebook about PhilHealth’s intention of increasing the amount being paid by OFWs on their insurance by a whooping 100%. To give non-OFWs a clear picture:

Filipinos who wish to or are working abroad are required to procure an Oversea Employment Certificate (OEC) prior to leaving the Philippines. This document is being checked by the Philippine Oversea Employment Agency (POEA) personnel at the airport before checking-in at the pre-departure area. In “theory”, failure to present these papers obliges OFWs to pay the necessary travel tax, plus penalties and more papers to fill up. But in “practice”, staff will tell you to go to the nearest POEA office to obtain your OEC! In other words, and I witness this first hand in NAIA, you can’t leave the country without it, period!

Now, prior to issuance of OEC (here’s where the “arm twisting begins”), they’ll require you to be a member (for non-members) of PAG-IBIG and you need to pay PhilHealth insurance with an elapse time of 1 or 2 years (which ever you prefer). But based on the comments I’ve read on that site, PhilHealth services is only good when they’re collecting premium charges but almost non-existing when it comes to disbursing remittances of OFW medical expenses.

Personally, I just took it in stride and pay all these “requirements”. But what I can’t swallow was this comment from a PhilHealth representative:

(We understand the different situation of OFWs abroad, like what was posted about the charges for the benefits are bigger than the remitted premiums. Like some OFWs with financial difficulties, we also have citizens who are more impoverished and do not pay any contribution but still receives medical benefits from us. Because PhilHealth is a social health insurance where the concept was taken from “social solidarity” where those who have the means, pays for the medical expenses of those who can’t afford.)

Wait! Stop! Rewind! Will somebody please explain this to me? I have no illusion of grandeur and knew the Philippines is a welfare state. But isn’t the money apportioned for the “indigents” supposed to come from collected revenues called TAXES. Why do they single out OFWs to shoulder the “fringe benefit” of people who are not OFWs, not to mention “free-loaders”, tax evaders and those who doesn’t pay taxes at all? What we pay to PhilHealth is NOT TAX! If they’re forcing this “health insurance” down our throat, it’s just right that only OFWs and their families benefits from it. Our funds should be a separate entity or better yet, a separate health insurance for OFWs and not PhilHealth!

No wonder PhilHealth is short in funding. Previous administration were distributing PhilHealth cards right and left to boost their malodorous image. They should be ashamed for letting those politicians used our hard-earned money in their electioneering.
Posted by BlogusVox 14 comments: 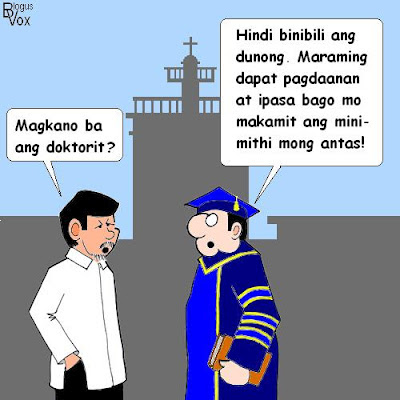 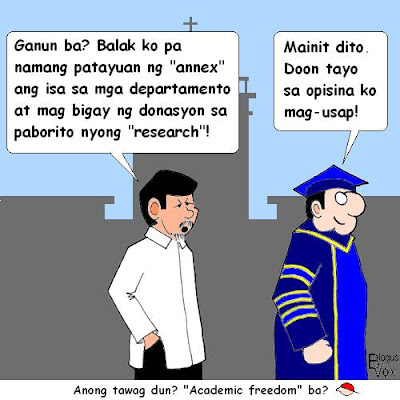 Things I Pondered and Did on My Vacation

Going Home
I’m a little deaf, especially inside an airplane but as I entered the aircraft, one attendant greets me “Welcome abort!”

Do you wonder why airline personnel still demonstrate the aircraft’s emergency procedure when something that’s not going to occur defeats the course of action to take... when they say - “In an UNLIKELY event of an emergency landing…”

At the tube, attendants lined up, smiling and bidding us goodbye – “Think yo fo’ flying Singgapo ehlines”. Regardless of our stop-over in Dubai and walking endlessly on that huge Changi airport to our next flight; service wise, I still think it’s one of the best airline I ever flied.

Home Sweet Home
Nothing significant happened while I was in my hometown except going to beaches, attending a wedding of my wife’s nephew, wake of a departed aunt and of course our high school reunion.

I met most of my old classmates and thanks to Facebook, I recognized most of their faces and some of their names. We reminisced what we did during high school and one just can’t help put on a “show” of “how good life is” in her adopted city, Lohndohn. Later that day, when most had their fill of San Mig Light and brandy, old buddies clustered together and talked nothing but their health. Back pains, rheumatism, cholesterol and “daily maintenance” dominate the conversation. I’m the only guy who was silent and got nothing to share since my yearly medical data indicates all my “levels” are below “critical”. A classmate even told me I haven’t change since we graduated. He asked who my doctor is – “Si Calayan ba o si Bello?” We flew back to Manila the following day.

In a Filipiniana boutique, I was admiring a polo barong with an embroidered map of the Philippines. The shop attendant approached me;
Saleslady - “Espesyal po ang barong na yan. Mismong kanang-kamay ng may-ari ng shop ang nag design at gumawa.”
Me           - “Ganun ba, ang galing naman. E anong nagawa ng kanyang kaliwang kamay?”
She paused for a few seconds, trying to absorb what I just said. It took a lopped-sided smile before she got it and began giggling in a high-pitch voice. I bought the barong.

Going Back
This time I’m pretty sure I wasn’t deaf. I definitely heard the attendant said – “Welcome abort”!
Posted by BlogusVox 16 comments: