Foreword: I’m not sharing this anecdote to “show case” my wedding but to illustrate how impractical a church wedding now a days – BlogusVox 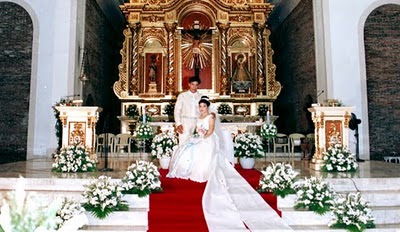 I tied the knot on the year the 20th century formally ended. But since I’m stationed abroad, my contribution with respect to its preparation wasn’t much, apart from supplying the finances needed for the occasion. My fiancée, her cousins, my sister and my Mom did all the groundwork. Her “traje de boda” and my barong were done by Leonardo’s, in which I paid a 5 figure amount at mura na daw yun. The couturier, who happens to be my cousin, told us it’s discounted, since I only paid for the material and labor. And that does not include what I paid for the “costumes” of our entourage. Other paraphernalia like flowers were airfreight from Baguio, and those tiny glass figure they gave away were bought in Manila including the printing of invitations with an RSVP embossed on it.

It may sound “classy”, but I particularly find the “RSVP” part silly. Literally, its French for “Respond if you please” or “tell-me-if-your-coming-because-the-caterer-charges-per-head” in plain English. You see, although we rented an “uppity” place for our dinner and social function, my family brought in the food and drinks. The main course was commissioned from a hotel chef while the rest was done by our local, but superb, cooks. So there’s no need on “counting heads”. We just have to make sure there’s plenty of tables and chairs. Officially, we have 300 guests, supposed to be a hundred and fifty persons from each side of the family plus a couple of dozen “extras”. Where I came from, if you invite “Mr. & Mrs. so and so”, expect the whole family (except the pets) to attend.

The photo studio who formally documented our wedding is another thing. The owner, a class-A smoocher, fawned on my fiancée like she’s royalty. Giving us a package deal worth another 5 figure that includes a wedding album and a full-length video that starts the moment she steps out of the shower and ends until I carry her to the bedroom and close the door. They even throw-in the photo album as a gift, and because of that, I’m so much “grateful”. But my fiancée was a little bit sore when she found out of my refusal to partake on their “dressing up” scene. They made do by taking pictures of my wardrobe, from my barong down to my shoes. It was well documented, except for my underwear which I’m already wearing at that time.

I’m not going into details on what happened before and, especially, what take place after the wedding. What I’m going to tell you are the events surrounding the church activities that really got my goat. But since this post is a little bit long, I’ll continue my story on my next post. Bitin ba?.