As everybody knows by now the Crown Prince of this kingdom passed away. To honor the prince and pay their respect, MBC group didn’t show any of its usual programs on air except documentaries of His Excellency’s biography along with the history and culture of the Middle East.

But what caught my interest was a segment featuring traditional games played by Middle Eastern children. I started “googling” and I found this article from a fellow blogger. A snippet of it explained:


“Gutalaguti [gut-ta-la-gut-ti]
This involves two teams of children, two sticks made from dried palm leaves and a small stone. One stick needs to be about 1 ½ to 2 feet and the other needs to be about 6 inches long.

The smaller stick is put on the ground, with one end resting on the stone – one end touches the floor and the other end is in the air. The idea is to hit the small stick with the big stick and curl it into the air. As the stick flies up you then hit it again to see how far you can hit it.

The person who has hit the stick has to run around an area marked out like a baseball or cricket pitch. Whilst this is happening the other team has to catch the stick.

Does it sound familiar? It is similar to our traditional children’s game which we call “Shato” in Luzon, “Shatong” in Cebu or “Pitiw” in my hometown. It’s amazing to think that children, continent apart, played an old yet very similar game! 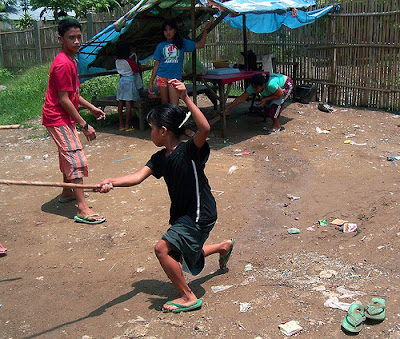 image was taken from immortal undead.

The question that comes to mind was – who did the importing? Tongue in cheek; it’s a possibility an OFW might have introduced it to their "sponsor’s" children (I know of some Saudi families who loves to eat “adobo” and “sinigang”). But a likely explanation might be that it came along, together with the Arabic words like “hukom” and “salamat”, when Arabs were once sea-faring traders and spreading the words of Islam on our shores.

Neither the less, who ever adapted, is not important. This was one of my favorite games when I was young. Not only was it a good exercise to both limbs and lungs, it also hones your counting skill.

But sadly, like any tradition, it died as time and technology changes. It’s no longer played by children, both here and in the Philippines.
Posted by BlogusVox